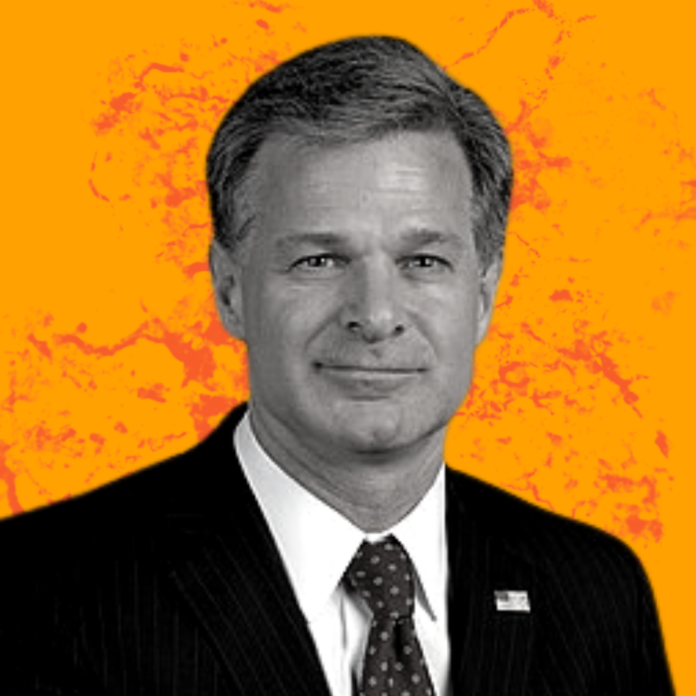 Through an era of frenetic administration turnover and acting department heads, FBI Director Christopher Wray has been unique not only in his ability to stay in the hot seat but, more importantly, to keep the bureau’s work and dedicated workforce above the political fray. Wray has kept his agency focused on rapidly evolving threats in a difficult environment that has included some in the public sphere accusing the FBI of being the bad guys, as well as an increase in violent threats against federal agents. Continually emphasizing the escalating threat posed by hard-to-intercept lone actors radicalized to violence online, Wray has also concentrated the bureau’s work on the long-term intelligence threat posed by China, cyber threats that can cripple critical sectors, international terrorism that still has sights set on the homeland, and a “hodgepodge” of domestic extremist threats, unrest, and hate crimes. “I feel like every day, I’m getting briefed on somebody throwing a Molotov cocktail at someone for some issue,” he recently told the Senate Judiciary Committee.

The former Bush administration assistant attorney general for the Justice Department’s Criminal Division, where he also oversaw the Counterterrorism Section and the Counterintelligence and Export Control Section, began his 10-year term leading the FBI in September 2017 after a private-sector stint leading the Special Matters and Government Investigations Practice Group at King & Spalding LLP. The government service of this New York City native and Yale grad began in 1997 when Wray became assistant United States attorney for the Northern District of Georgia. There he prosecuted a wide variety of federal criminal cases, including public corruption, gun trafficking, drug offenses, and financial fraud. In 2001, Wray was named associate deputy attorney general, and then principal associate deputy attorney general, in the Office of the Deputy Attorney General in Washington. His duties there spanned the full DOJ, including responsibility for sensitive investigations conducted by DOJ’s law enforcement agencies. Wray was nominated by President George W. Bush in 2003 to be the assistant attorney general for DOJ’s Criminal Division. Wray was a member of the President’s Corporate Fraud Task Force, supervised the Enron Task Force, and served as a leader in DOJ’s post-9/11 efforts to combat terrorism, espionage, and cybercrime with domestic and foreign government partners. At the conclusion of his tenure, Wray was awarded the Edmund J. Randolph Award, DOJ’s highest award for leadership and public service.

In 2020, the FBI Agents Association told both presidential candidates that their members “strongly support Director Wray continuing his ten-year term,” stressing that he “has led the FBI through a complex period” and “has not led the Bureau in a political manner, and politics should not determine his fate as Director.”